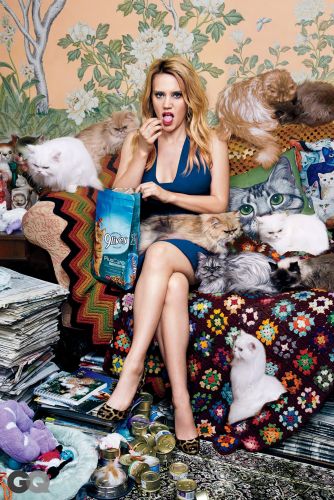 Kate McKinnon is the First Lady of Weird on SNL, a purveyor of “empathetic mockery” of the uncommonest oddballs—like Ellen, Hillary, the Biebs. And in the upcoming year—with a handful of films and the blessing to skewer candidate Clinton week in and out—she’ll serve as the ideal antidote to the endless election season. Kate 2016!

During the past four years on Saturday Night Live, Kate McKinnon has led a one-woman parade of the most exuberant impressions on television. There she is, commanding from a couch as Hillary Clinton one minute and bopping around as Justin Bieber, Iggy Azalea, Shakira, or Ellen DeGeneres the next. It’s like McKinnon is this joyous chameleon who’s finally been gifted an infinite wig supply.

If there is any thread that connects her characters, it’s wide eyes that are Lucille Ball goofy and baby-hedgehog endearing. And the eyes were never wider than in McKinnon’s first parody of German chancellor Angela Merkel. In the sketch, Merkel frets that U.S. spies are judging her lonely text messages (her “tiny e-mails”). “I get that German thing of being very buttoned-up with a molten-lava cake of middle-school feelings inside of it,” McKinnon says. “I just love trying to restrain that, and it just dribbles out anyway.“

Even as she bores down into the gooey center—a devastating skill of hers—it’s all in the service of her brand of empathetic mockery. “I’ve really tried to straddle the line of being funny and being nice,” she says in her own peculiar voice. (“They tell me I sound Dutch, but I’m from Long Island.“)

“And while I cross the line occasionally, I sometimes think I’m too chickenshit and I don’t go far enough.” It’s not an easy tightrope to walk, she says.

McKinnon works hard to isolate some sweetness in even the toughest cookies, like Hillary. “Whatever makes a person vulnerable,” she says, “is the precise thing that makes them lovable.” Approval from the celebrities she impersonates is a testament to the deftness of her balancing act. When Ellen and the Biebs met McKinnon for the first time, they beamed at her; they enjoy seeing themselves in McKinnon’s mirror.

Now, on the heels of the fortieth season of SNL, she’s appearing in this month’s Zach Galifianakis–Kristen Wiig bank-heist comedy, Masterminds. McKinnon brings her signature concoction (hard-crust exterior, warm center) to her role as Zach G.’s reluctant bride-to-be: never more evident than in the scene where they pose for one loveless engagement picture after another. And earlier this summer she was off in Boston filming Paul Feig’s Ghostbusters, where, in her downtime, McKinnon was distracted by love from her son, Nino Positano, a 5-year-old tuxedo cat. He’s a lavisher of “aggressive affection” that he expresses by slamming his face against her nose like a tiny football player. “He’s very much center stage in my life,” she says. “I didn’t know I had it in me to be so concerned with the welfare of an alley animal.“